I   have enjoyed playing Tag with the Universe quite a bit in the past few years but it has taken some getting used to; especially the rules! Anyone who tunes into the Universe on a regular basis knows what I am talking about as it is not an exact science but rather a multi-layered, complex series of events, emotions and self-realisation. An intricate game of adult Tag is the best way I can describe it sometimes. Books like “The Secret” tries to simplify the process making it seem as if there is a set formula but I am here to say there is not. Working with the Universe requires great care and an ability to listen carefully to say the very least.

The biggest rule I needed to learn is that there are no TAG-BACKS. Go figure!

AND TAG BACK THE UNIVERSE – after all, I had accomplished a miracle that I would never have thought could occur in my lifetime. I fully expected the Universe to do its job now since I personally had done far more than it had in the process.

So the UNIVERSE decided that it was IT and encouraged me to send my book to the CEO of CHAPTERS/INDIGO – fair dame of Canada and the woman from whom I bought almost all of her Picks (Enter: Heather’s Picks, a table in each store dedicated to personal choices. These books became instant best-sellers). I absolutely relied on her choices not knowing she was an actual person-in-charge, thinking she was a fictional character – Ha! Wrong. Heather Reisman was an actual person who was about to receive my book with a hand-written note from me asking her to enjoy my book ‘Prom Girls a North American Rite of Passage’. 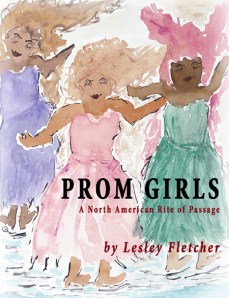 The UNIVERSE provided the gumption for me to do this and then the UNIVERSE had Heather’s (1st name basis now) secretary call me up one random day to say – ‘Heather Reisman loves your book and thinks it’s charming. She asked me to call you and let you know she will be presenting it to her buying committee.”

Now, any Savvy person would of course ask a pertinent question or two but not me. I am (was?) not savvy and not good with phone calls at all so I thanked her quickly so that I could go and do my Happy Dance up and down the hallway, complete with screams of delight, recognition of the Universe and dreams of a fiscally rewarding career as a writer. I envisioned MY beautiful book adoring her ‘Heather’s Picks’ Table and completely outselling the rest sheerly because my cover was amazing and would attract the most attention ever in the history of Chapters/Indigo.

Whew! I was exhausted after all I had accomplished and so very grateful to the mighty UNIVERSE for its guidance.

Lesley – Who should remove her rose-coloured glasses from time to time, me thinks 😉

19 thoughts on “Playing #Tag with the #Universe !”