For Dad, it was the night of his 28th birthday. He was living in lower Westmount (it was cheap back then), fresh out of law school, loans up the wazoo, making peanuts at his articling job when he, too, was arrested. As an educated young advocate, he had helped lead the neighbourhood coalition that was formed to fight overnight parking tickets that beseeched the neighbourhood. None of his neighbours, who were recipients of these tickets, paid them. They were determined to put forth a united front in a fight with city hall. They believed that the power of their numbers would prevail. The fight had gone on long enough for a substantial amount of unpaid tickets to be noticed. Although the fight had begun, the battle was not over, and neither side showed signs of budging.
He was hurrying to meet a large group of his friends to celebrate. As he raced down St. Catharine and crossed at the corner of Guy he neglected (ha) to stop running, even though the light was red. In Toronto, they call it j-walking. Here it is called, “Keep it moving, people.” Meanwhile, a car some cowboy was driving managed to hit him as he darted across the street. Unhurt but a little shaken, he took the hand offered when he tried to get up. He thanked the police officer and went to hurry back on his way, assuring the officer he was fine. The officer, obliged by law, retained him, made sure of his well-being, sent off the driver once he had checked him out, and processed Pink’s dad’s ID.

He was j-walking; there is a fine. (Surprised?)

The car that hit him was not at fault.

He had fifty-two outstanding parking tickets.

There were no cell phones back then.
.
All of his friends, his brother, and his sister, were waiting at a street corner for him.

He was a GD lawyer who got himself arrested. He was totally humiliated and pissed. 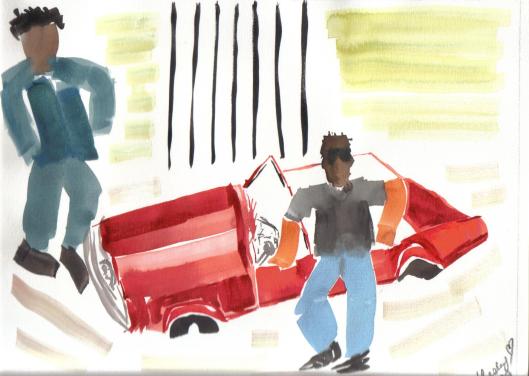 As he waited for Baller to emerge, and after taking care of the fines and bail, Pink’s dad knew he could clear the kid. He made an out-of-character snap decision to hire Baller as a runner at his firm for the summer. He would boost the salary a bit so he could be “paid back” for the bailout, court appearance, and fines by just taking it off the top of Baller’s pay cheque.

Thanks to the bridges and highways being in a perpetual state of construction, they had lots of time to shoot the breeze while they eventually managed the detours in spite of someone having changed all the signs. It allowed time for Pink’s dad to realize that life had passed him by far too quickly and he, oddly, hadn’t really felt this alive in years. He found himself, in a way, envying Baller’s place in existence. One thing was for sure. Life was not going to pass him by any more.

Baller had a feeling his luck was about to change for good. He was determined not to let life pass him by anymore, also. He was going to grab that brass ring. Yes, the old Baller luck was In Da House! A summer job at a prestigious law firm and a chance to throw it out at both his friends and Pink! Yes. Yes. Yes. This was it! He was certain. Dead certain. Everything seemed good at this moment, but only because he was totally oblivious to a couple of things: The “Butt Campaign,” and the fact that his math teacher (head of the math department) had just accepted a position to head up the Pathways to Math department at the local collage Baller would be attending.

This the third and final partial excerpt from my book – Prom Girls a North American Rite of Passage.

In the book I explore four distinct paths. One of the paths is the story of Baller and Pink and their escapades of the evening.  My layout and copy editor along with myself cursed the document up – down – and sideways. It locked up three computers at a time with the sheer weight of the images. We thought it had a mind of its own! As I read back on what I wrote… I know it did.

Short Review:“Prom girls is not as light and fluffy as you might expect. I like the funny stories and the sad stories equally. One of the stories is written in the language of ‘texting’ as a young man describes his anxieties of asking out a girl.”

*IF you are interested in purchasing this book, please contact me directly as I have stock at home. $20.00 including postage. Thanks so much.